Google, along with many leading marketing experts, believe that 360 degree interactive media and virtual tours are one of the best ways to promote properties and locations. Whilst it will never be as good as being there in person, 360 media and virtual reality tours can showcase and advertise a location to a worldwide audience like no other technology.

I first started shooting 360 degree interactive panoramas and virtual tours back in 2007. At that time, very few people were familiar with the concept of 360 technology, and almost no photographers were shooting it.  However, I could see that the potential of this new technology for my tourism client base was considerable, and I quickly embraced 360 media to become something of a pioneer in the high end 360 virtual tour industry.

I have worked closely with the National Trust photographic department for many years, i shot stills for the National Trust Photo Library (NTPL / NTI) as well as producing some videos for them too. In 2009 i spoke with the NT head office about the possibility of shooting 360 imagery, since i believed it could very much benefit their marketing and brand strategy. Later that same year, I received a call from them asking me to try out this new and exciting 360 media for a forthcoming promotional campaign they had in mind. They commissioned me to fly to Northern Ireland and shoot a place I’d always wanted to visit – The Giant’s Causeway in County Antrim.

The Giant’s Causeway in County Antrim, Northern Irelend. Using my experience as a landscape and location photographer, I chose to photographe the location during the beautiful, romantic, golden light of sunset. This panorama is a two dimensional representation of the 360 degree view.

The Giant’s Causeway is a UNESCO World Heritage Site that’s managed by The National Trust. The Trust wanted to raise the profile of this greatly underestimated and unique place for a promotional campaign entitled “A Giant’s Cause”. They felt that my high impact 360 degree virtual reality tours would be an ideal way to promote the location online. I also suggested the idea of adding real location sound recording to make the experience far more true to life, something that very few other virtual tour producers seemed to have ever considered. Once again, this made my own brand of 360 virtual reality tour imagery really stand out from the competition, as well as giving a much more realistic online user experience. The audio and visual connection also creates a much more true to life virtual reality experience when viewed in a VR headset.

This 360 degree virtual reality tour takes in four views of The Giant’s Causeway and is linked together by hotspots. It also includes Google Mapping and the carefully approved National Trust control interface. You can take the online virtual tour to “The Giant’s Causeway” by clicking the link or the photo below : 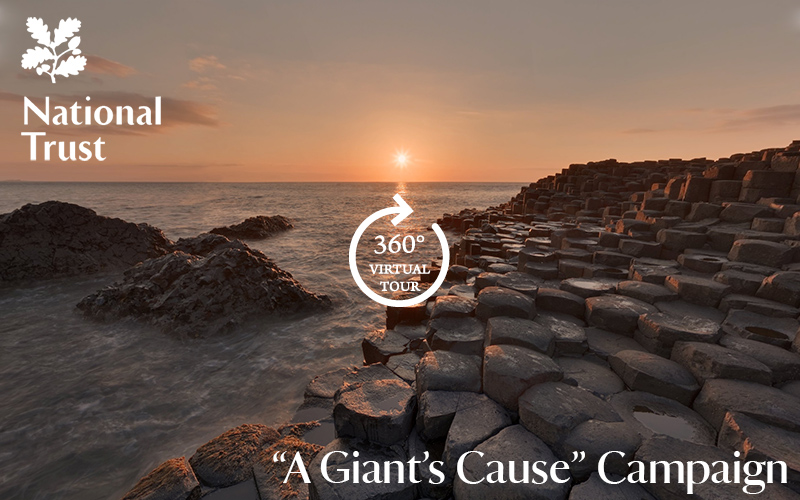 This tour is also available on my free VR app, for viewing via a Google Cardboard type headsets, Samsung Gear VR or Oculus Go and Quest. Please see my “Virtual Reality VR” page for download links.